Army & Navy Shutters Historic Flagship Hastings Street Storefront in downtown Vancouver: One of Canada’s original off-price retailers has shuttered part of its downtown Vancouver flagship as the retailer marks its 100th birthday. Army & Navy announced on its social media last week that had closed its multi-level building located at 27 West Hastings Street in Vancouver’s notorious Downtown Eastside, while at the same time it will renovate its store at 36 West Cordova Street (which connects to the Hastings Street building over and under a laneway).

Army & Navy was founded by Sam Cohen in 1919 and the chain now operates stores in Vancouver, New Westminster, Langley, Edmonton and Calgary. At one time, the company had many more stores including units in Regina and even in Moose Jaw, Saskatchewan.

According to an article in the Georgia Straight, Army & Navy has occupied the West Cordova Street building, called the ‘Dunn-Miller Block’, since 1948.

It’s unclear what will happen to the Hastings Street Army & Navy building, which is in a challenging area known for drug addiction, mental health issues and homelessness. While Vancouver’s Downtown Eastside has shown signs of gentrification over the years, the area continues to experience considerable challenges that have been exasperated by the city’s tragic fentanyl crisis.

Montreal’s Ogilvy officially becomes ‘Holt Renfrew Ogilvy’: As part of Holt Renfrew’s initiative to build a 250,000 luxury flagship in downtown Montreal, the company announced last week that it has officially renamed the iconic Ogilvy store at 1307 Ste-Catherine Street West as ‘Holt Renfrew Ogilvy’. This week, parts of the store’s expansion and renovation will be unveiled to the public with a completion date expected for 2020.

The massive store will feature a ground floor with 20,000 square feet of luxury brand boutiques (most being leased concessions) for brands including Chanel, Dior, Fendi, Hermes, Louis Vuitton, Prada, Bottega Veneta, Tiffany & Co. and others. A new 8,000 square foot footwear salon will be among the largest for the company, and a 23,000 square foot beauty floor will be unveiled on the store’s lower level this week, featuring 120 brands. A renovated men’s floor will feature some of the world’s priciest and most desired brands with boutiques for brands such as Celine, Dior, Fendi and Tom Ford.

As well, a Four Seasons Hotel and Private Residences will connect to the new Holt Renfrew Ogilvy, featuring a luxury hotel component as well as luxury condominium residences above that have been selling well into the millions of dollars.

After the renovation/expansion to Holt Renfrew Ogilvy is finished, the existing 83,000 square foot Holt Renfrew store at 1300 Sherbrooke Street West will close. There’s no word yet on what will happen to the building, and some speculate it could become a mix of retail and high-end residential.

The company recently opened a new location on St. Martin Boulevard in Laval, near Montreal, and this month the company will open a kiosk at Oakville Place in Oakville, Ontario.

The plan for continued Canadian expansion includes seeking out kiosks in regional or super regional malls. As well, the company is looking at open-air centres with supermarkets, pharmacy and a bank, ideally between 500 and 1,000 square feet. International Currency Exchange is also looking specifically at downtown Montreal and downtown Toronto, where the area near the busy intersection of Yonge Street and Dundas Street are targets.

The company is working with Tony Flanz of Think Retail, who is the point of contact for the brand’s real estate in Canada. Think Retail has worked with International Currency Exchange since 2008. 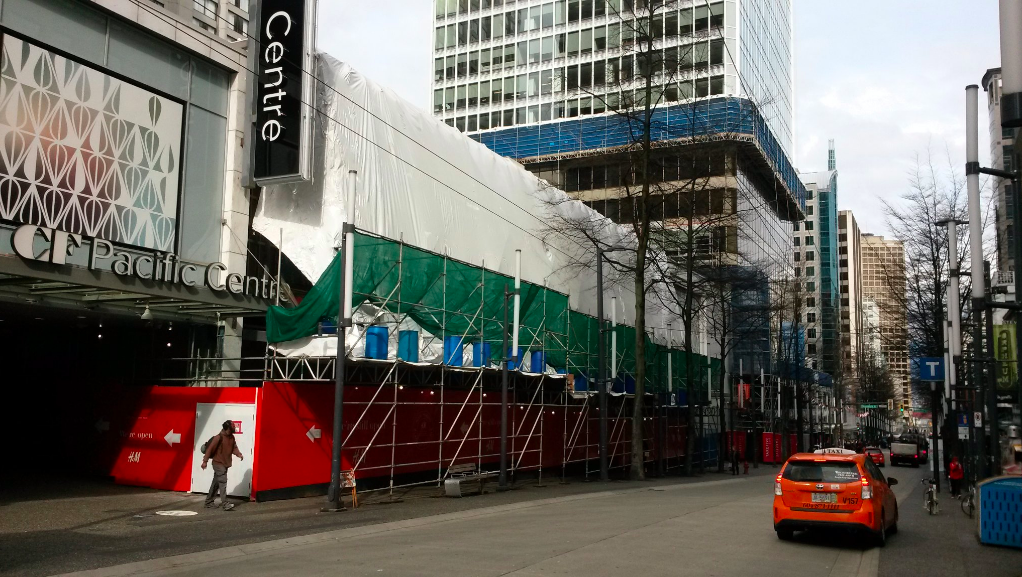 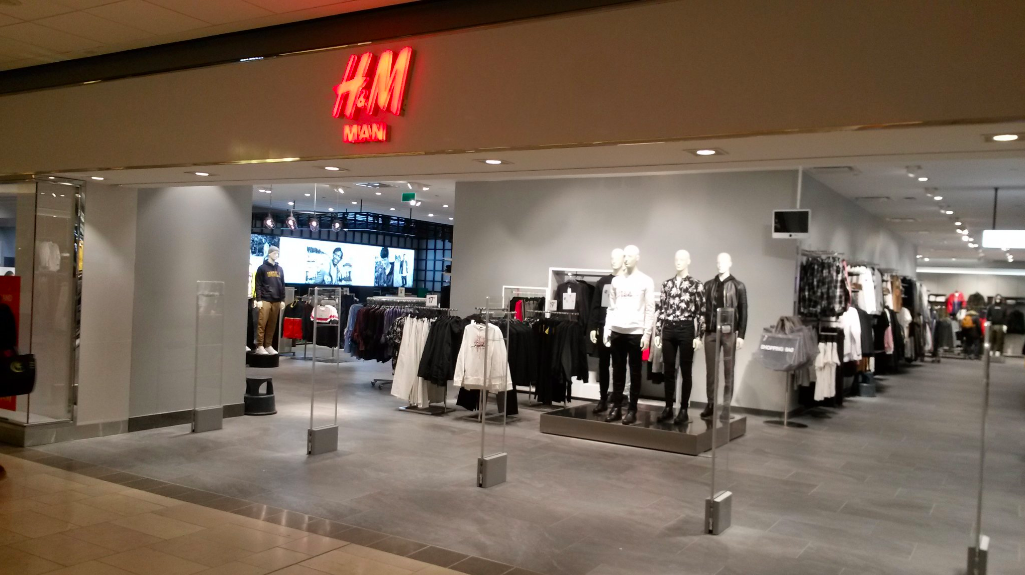 New H&M Man on the concourse/mall level of CF Pacific Centre. Escalators to be (re) installed. Photo: ‘Granville Street’ via Twitter. 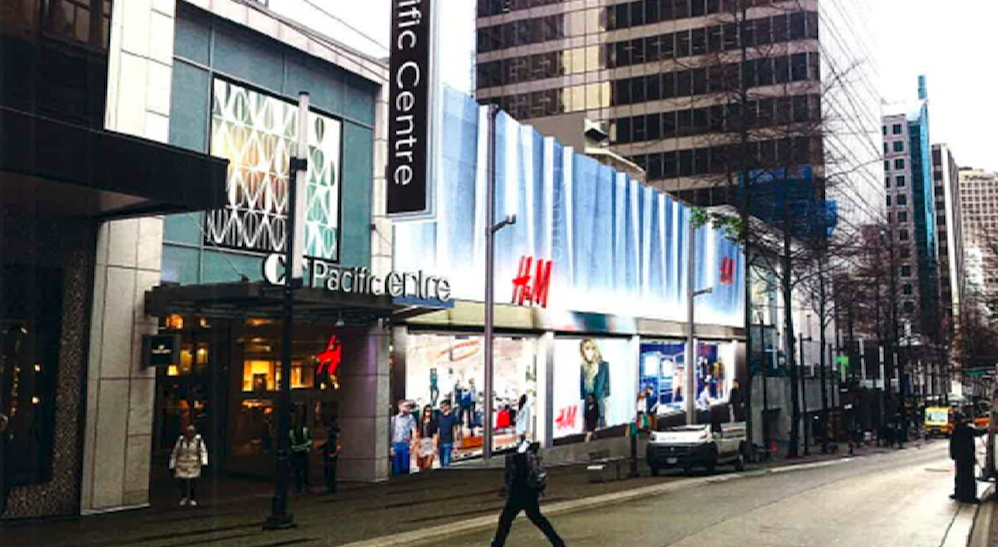 H&M Expands Downtown Vancouver Flagship Amid Renovation: Swedish fast-fashion retailer H&M is expanding and renovating its CF Pacific Centre flagship store in Vancouver, which included adding a new floor for menswear as well as a renovation to its interior and exterior.

Last week the ‘Granville Street’ Twitter account showed an image of the exterior of the H&M store being renovated, and last month the same account provided the above photo of a new floor that was added. Prior to the expansion, H&M occupied 31,437 square feet over two levels in the mall, and the addition of a lower-level retail space (formerly occupied by US retailer Express) has brought the store to just under 40,000 square feet, making it second in size to the three-level 52,600 square foot H&M flagship at CF Toronto Eaton Centre.

Interestingly, CF Pacific Centre’s H&M store was once occupied by Holt Renfrew, which relocated to a much larger space (almost 150,000 square feet at the time) in the spring of 2007. The former Holt Renfrew occupied about 68,000 square feet over three floors, including the basement level that H&M recently expanded into.

Cineplex Announces 1st Playdium Location in Atlantic Canada: Entertainment and media behemoth Cineplex has announced that it will open the first Playdium location in Atlantic Canada in Dartmouth, Nova Scotia. The entertainment complex, designed for kids, will “be a tech-infused, affordable place to play that offers classic and state-of-the-art games, unique interactive experiences like virtual reality, bowling and rope courses as well as “a variety of fun and fresh food”. Dartmouth’s Playdium will be located at the Dartmouth Crossing Shopping Centre (near the intersection of Wright Avenue and Countryview Drive). Construction begins this fall with an anticipated 2020 opening date.

The 30,000 square foot Playdium complex will include about 20,000 square feet that will be dedicated to games and attractions for all skill levels, as well as an additional 10,000 square feet that will feature food and beverage options. On the menu will be chef-inspired burgers and sandwiches, pizzas, nachos, tacos and bowls and a selection of sweet treats,” according to Cineplex. It will become “the perfect spot for parties, events and team building, with private rooms for birthday parties and special gatherings as well as lounges for adults and parents with views of the games floor.”

Cineplex kicked off the expansion of its Playdium concept in 2017 with plans for between 15 and 20 locations to open in the coming years. Cineplex operates various entertainment concepts including theatres as well as ‘The Rec Room’, which caters to adults and contains entertainment as well as food and beverage options. Given the experiential nature of Cineplex businesses, it is in some respect competing with retailers for consumer dollars.

Brokerage Jones Lang Lasalle (JLL) Canada represents Playdium under the direction of Tim Sanderson and Paul Ferreira in Toronto, along with Chris Wood in the Vancouver office.

Uniqlo Opens Oshawa Store as it Prepares for National Expansion: Popular Japanese fashion retailer Uniqlo continues to expand in Canada by opening stores. Over the weekend, the retailer opened a 16,000 square foot storefront at Oshawa Centre, and on April 12 Uniqlo will open at Upper Canada Mall in Newmarket, Ontario.

The Oshawa store is the 10th in Canada for Uniqlo, which entered the country in the fall of 2016 when it opened two Toronto flagships. The company has since opened four stores in the Vancouver area and in the Greater Toronto Area, Uniqlo now has six stores. The company could open about 100 stores in Canada, according to the company.

Uniqlo’s colourful stores are known for their staple fashion lines — Uniqlo ‘ultra light down puffer jackets’ are wildly popular worldwide, as is the brand’s cashmere offerings and the ‘HEATTECH’ line which features a technological innovation involving inner wear that generates heat from one’s own body temperature (Uniqlo refers to its fashions as ‘LifeWear’). Uniqlo also regularly releases limited-edition t-shirts which often sellout quickly to crowds of fans.

Uniqlo is also expected to announce its first Montreal store(s) soon, as job postings on the company’s website indicate such.

The breaking down of sweat by bacteria causes the irritating phenomenon of smelly feet.  MP Magic Socks are made of fabric infused with silver, copper, and zinc.  The technology of metal infusion was originally developed for the aerospace industry, and is now being made available for everyday use.  Utilizing multiple metals helps to kill more types of bacteria, which makes the MP Magic socks antibacterial.

There appears to be a demand for this type of product as MP Magic Socks are partially crowdfunded. A campaign that began on November 1st, 2018 saw the company achieve their fundraising goal in six hours and eventually raise four times the amount they initially sought.  The socks claim to keep feet dry and odorless all day long and are said to be comfortable, stylish and ideal for daily wear.

Boutique Colori Shutters Only Store Location Outside of Quebec: In November of 2017, Quebec-based women’s clothing retailer Boutique Colori Inc. opened its first storefront outside of Quebec at the Halifax Shopping Centre. The boutique, spanning nearly 1,500 square feet, was located on the mall’s upper level.

Halifax ReTales reported over the weekend that the store had shuttered and over the span of a day, signage had been removed and paper put up over the windows.

An article in Retail Insider from October of 2017 discussed how Colori was testing the waters with the new Halifax store before expanding to other markets in Canada.

Boutique Colori operates about 40 stores in Quebec, and targets women aged 18-35 with a range of trendy items ranging from casual tops and sweaters to evening wear, as well as a range of jewellery and other accessories. 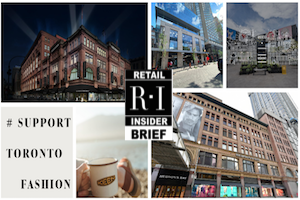 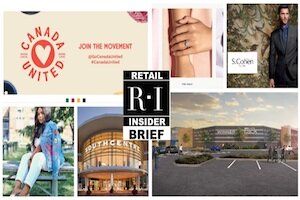 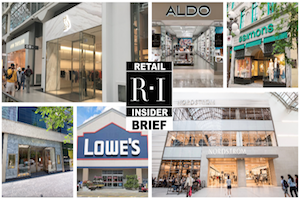 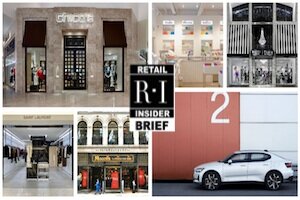 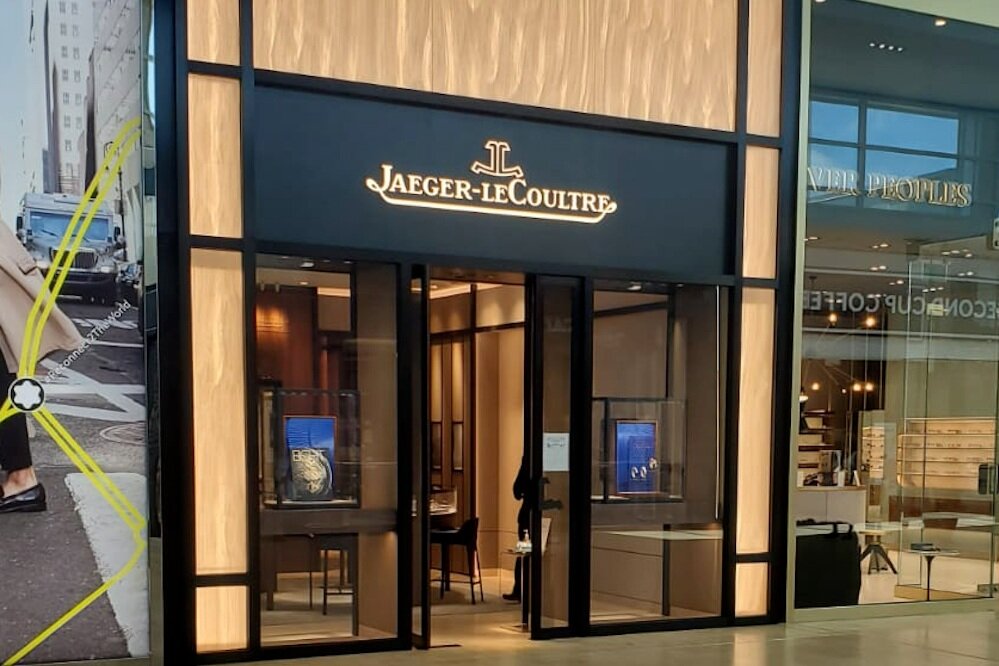 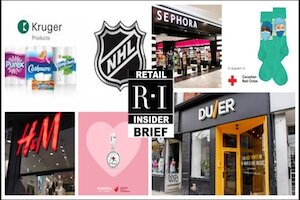 At an unprecedented time, retailers and brands across the country continue to do good deeds for the community.

OfficeMax Grand & Toy to close all 19 retail stores, due...